Here we are, in the throes of summer.  Man, has it been busy.  Between the garden and fixing up the old farm house, I haven’t had many spare minutes.  When I do, we head to the beach.  Colorado gave me the mountains, but robbed me of the ocean.  I have to say that I prefer the latter of the two.

I beach comb while the kids are in the water.  In the winter, they wander the beach with me.  The beach in the winter sometimes reminds me of the Cormac McCarthy book, The Road.  Lonely.  Desolate.  Still pretty awesome, though.

I find a lot of wood.  Take a state with a working coastline, and it’s no shock that the weather beaten remnants of dock structures wash up on shore from time to time.  We’ve scavenged from Belfast to Old Orchard.  The treasures on every beach are different.

I’ve been trying to shake the money tree a little harder.  Why?  AR-15s, that’s why.  Components are cheap right now.  The other brother on this blog, B&A, made me an AR pistol in .300 AAC Blackout back in late May.  I’ve been hooked ever since.  I might add that prices are dropping since Trump took office.  I’ll review the pistol in a later post. 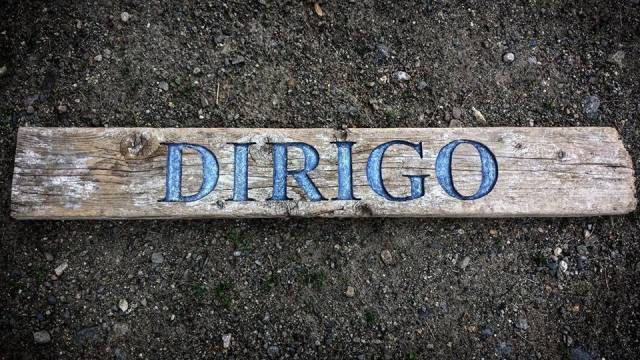 Anyhow, I’ve started selling these signs.  I print the letters, align them, trace them on, route them out, then paint them in.  I’ve sold a few.  I’m not breaking the bank, but I am making a little extra scratch.

I’ve also had the idea to try and utilize drift wood and scrap metal.  These can hang on the wall, to hang coasts and such from, or they can lay flat as their own artistic piece.  Personally, I think most art is a bunch of hooey.  These things aren’t any sort of expression of my inner child or any bologna like that.  I just like drift wood and composition. 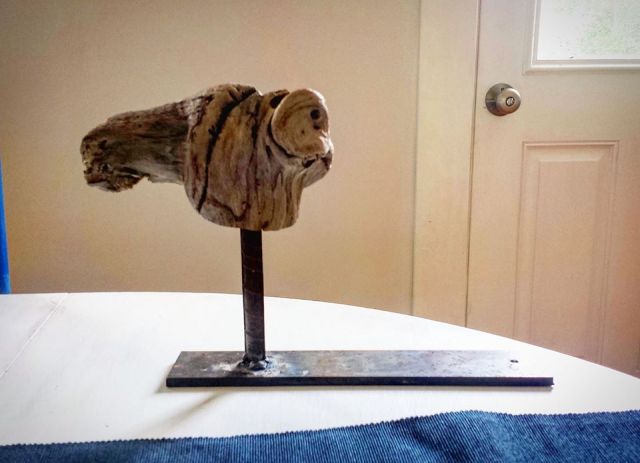 If anyone is still reading, check in.  Even if you’re new.  Let us know what’s up in your world.  Me and that B&A bastard have been busy with kids and such, but I’m going to make a better effort to check in here and there. 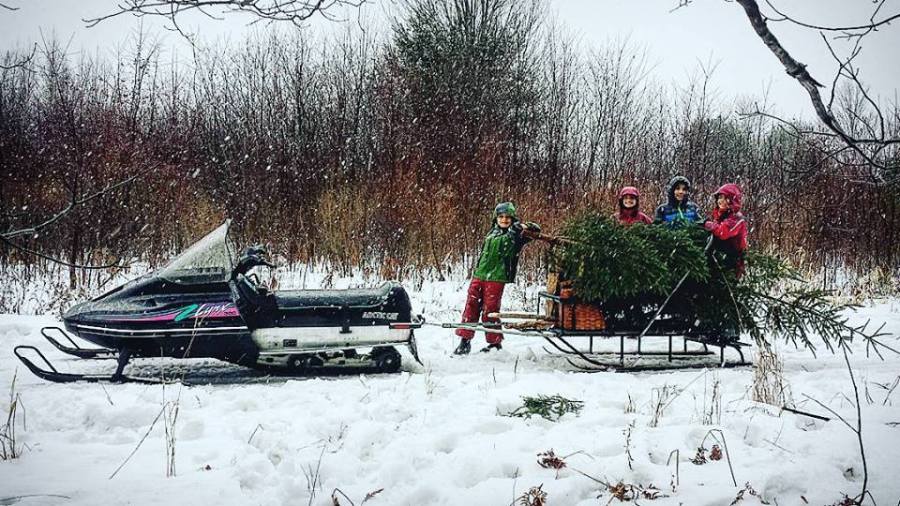 We’ve been cutting a lot of wood on the back acreage.  I bought a 1991 Arctic Cat Lynx 300 last fall and it’s the best $700 I’ve spent on homestead equipment.  I was a Polaris man growing up.  This Arctic Cat has expanded my horizons.

We’ve had an easy winter.  Lots of rain and not much snow.  That makes it hard on the old snowmobile, especially in the sink holes.  We ran into a slight problem yesterday.

20 minutes with the Echo Timberwolf 590  chainsaw and a little grunt work and we made ourselves a solution.

We turned the Penske truck in at the York location and worked on setting up shop.  Finding a rent in Maine that is month-to-month and will accommodate a family of six is difficult.  You might as well tell your future landlord that you have tuberculosis and a penchant for accidentally crapping your pants every time you cough and that you don’t believe in showering because the bedbugs like water too much.  Really, landlords aren’t fond of children or short term rentals.  I completely understand why. 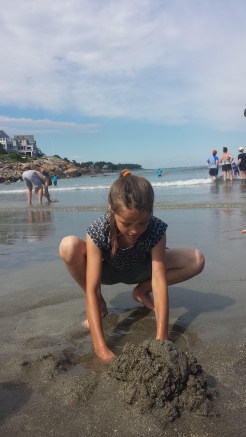 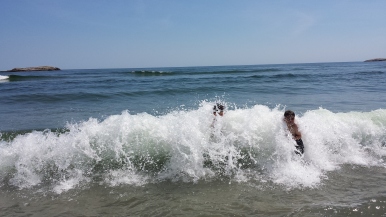 We ended up in an “undesirable” part of Maine, which actually isn’t that bad.  It’s a quiet street in a neighborhood full of old people.  The kids are having fun with the fact that there’s a sidewalk out front and a paved driveway.  They’ve gotten lots of road rash from dumping their bikes and scooters on the pavement.  The house we’re in is…..a bit of a rat hole.  I don’t say that out of a lack of graciousness, but most of the doors don’t close, there’s a pretty obvious mold problem and the 1960s carpet on the stairs smells like urine.  Oh, and every single-pane window was painted shut. 20 minutes with my knife solved that problem.  The list is much longer, but there’s really no use in writing it down. 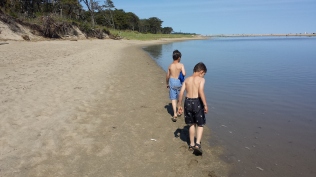 With all of this, we’re all struggling on some level.  For me, I can’t go outside and work on something, which is what I do.  Even the three wheeler is off limits. There’s no good space to ride, it would upset the neighbors and my tools are in storage.  My wife doesn’t keep the house in tip-top shape as she usually does, because she realizes that there’s no sense in trying to polish a turd; it’ll still be a turd.  The children are tired of my paranoid speeches about watching out for strangers, staying out of the road and not having a big back yard to play.   We’ve broken our rules of excessive video gaming and movie watching, mostly because at times, there’s no other choice.

We’re having adventures as much as we can.  We’ve hit the beach several times.  That seems to be our happy place.  We’ve gone to see my family and the kids loved that. Uncle Bern cut the boys loose with axes, which they were totally into.

I’m not working yet, either.  I’ve had a few interviews, but no callbacks, which I’m not too sad about.  In most cases, I could tell that I wasn’t the right fit for the job or that I just didn’t want the job.  I’m going to try temping next week so that we can stop the negative cash flow. 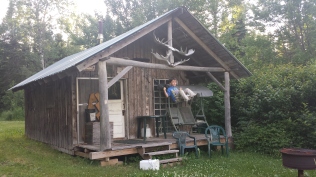 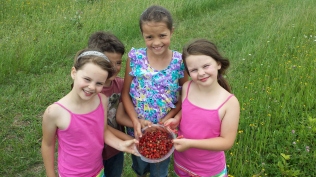 What I can say is that I understand a little better why the world is so screwed up.  People live like this every day.  There’s nothing specifically wrong with this lifestyle, but I think it lacks direction, which can be bad for the human psyche.  This is why people get depressed and go crazy.  There’s simply not enough to do.  Maybe if we didn’t have the internet and social media, people would get more involved in their communities again.

It’s all part of the transition.  It isn’t easy, but it’s necessary.  We keep reminding ourselves that this is the necessary step to get us where we want to be, producing our own food and being closer to the land.  It’s easy to lose sight of that as an apartment dweller. 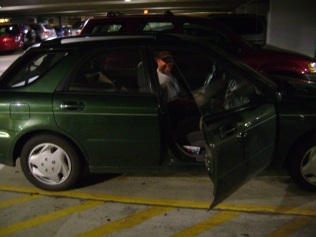 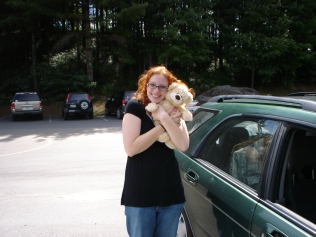 I’ve had my fair share of adventures in a Subaru that could have only come about in a Subaru, in places only a Subaru go! Here is a beautiful example of Subaru love and respect. 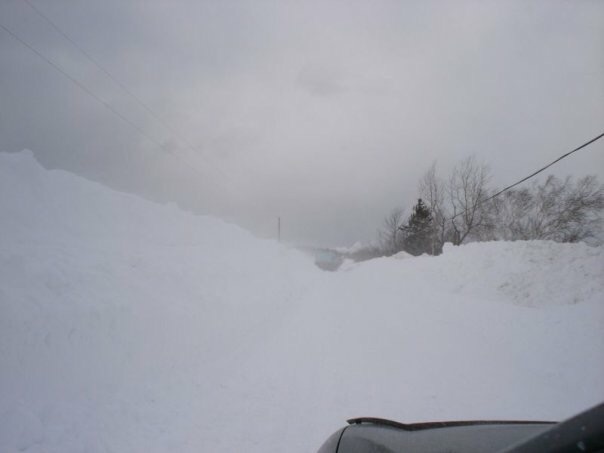