Creepy title, right?  Don’t worry, we’re not going to get paranormal at all.  I’m just going to make a small observation.

When dad died last year, I inherited a few of his rifles and all of his pistols.  Among them was a Savage Mark II bolt action .22.  It was a nice little rifle with a scope, but I’ve got more than a few .22 rifles and didn’t need another.  What I needed was a smaller .22 for the kids.  I talked to my nephew and swapped him his Davey Crickett for the Savage.  He got the better end of the deal, but I wanted him to have it.

We finally got the opportunity to shoot it a few weekends ago.  He hadn’t shot in a long time, so we went through basic safety, then I showed him how to shoot the gun.  For a guy who had never used a scope, he did okay. 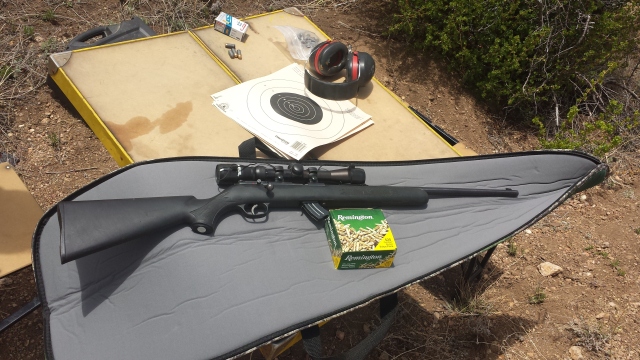 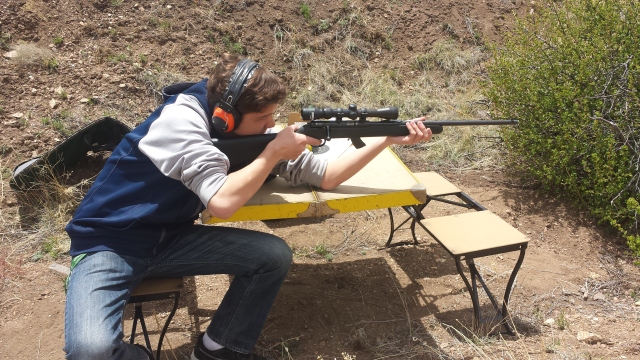 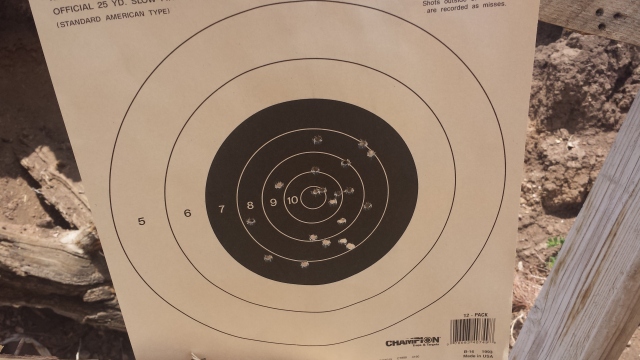 Before I let him shoot, I took a crack at it.  I don’t have pictures, but I was hitting low and to the left.  My heart sank a little.  I inherited my mom’s Remington Model 788 in .243 about fifteen years ago.  My dad was the one who lined it in all those years back.  It always shoots low and to the left and I’ve always just compensated for it instead of fixing it.  I asked him about it when I got the gun and he said that the weight and stance of one shooter to the next would make a gun hit in slightly different spots for different people.  Every gun I’ve ever shot that he lined in was low and to the left.  The legacy endures, even where you aren’t expecting it to.

I think I’m starting to get old.  I’m approaching 40.  While I won’t say that I’m old (specifically to not offend some of our key readers, haha.), I do remember a good friend saying that 40 is the youth of old age and the old age of youth.  What a depressing summary of being middle aged.

My right eye is shot.  If I close my left, everything goes blurry, especially far away.  The left is still good though, so instead of wearing those pesky glasses the eye doctor gave me (that I’ve since lost), I figured I’d try some left eye shooting.

I tested myself shooting at targets at ten yards with different eyes, with the aforementioned Smith & Wesson Model 17-6.  While I’m not shooting the pistol as well as I’d like, I saw a marked improvement by following Bern and B&A’s advice, as previously mentioned.  However, the right eye is still better than the left.  I can’t seem to overcome its dominance.  I just aim through the blur, mostly.

I improved with my left on the second round.  I saw how far left I was shooting and compensated, which helped.  Try standing with a pistol pointed at something.  Open your left eye, then switch to the right.  You’ll have to adjust the aim of the pistol.  This runs into a problem when you’ve trained your hands to situate themselves for a right handed aim.

I’m going to keep working on this.  I haven’t yet looked into tricks and tips on the internet, but will soon.  So far, so good, but old right-eye habits die hard.

When my dad passed last August, I inherited his pistols.  He had some pieces  that I probably never would purchased, mostly because I’m broke.  He was as well, but he appreciated a good pistol and tended to spend his tax returns on fun stuff. 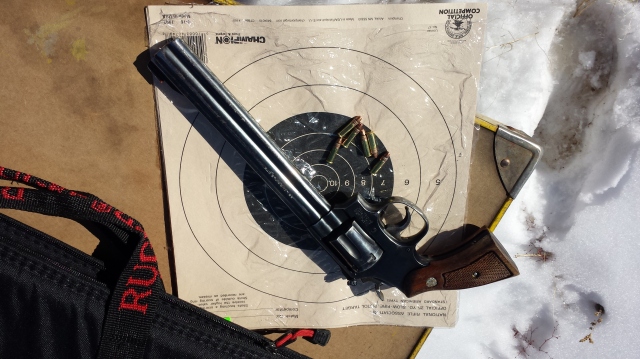 This is his Smith & Wesson 17-6.   My mom encouraged me and my brother to “help” her buy it for him back in the 1980s.  We contributed money earned from our paper routes, delivering the Bangor Daily News every morning.  She paid for the lion’s share, and we contributed our bits.  Dad had many Smiths, almost all with the Dirty Harry style 8 3/8″ barrels.

This one in particular is fun to pull out at the range.  I get a lot of looks when I point it down range.  However, when I shoot it, I get a lot of raised eyebrows.  It’s chambered in .22 long rifle.  People see the barrel and assume it’s going to roar and knock things over, but instead, there’s a whole lot of *pew-pew-pew* action.

From Wikipedia:  S&W also shipped the Model 17 featuring a 4″, 6″ or 8 3/8″ full under lug barrel. The “under lug” was a solid, blued steel, circular rod, cast as part of the barrel, and running under the barrel from the front of the cylinder yoke to the muzzle’s end.. The under lug not only enclosed the ejector rod, it also added considerable weight to the gun itself. The under lug model shipped with a special round butt wood grip that featured inletted finger grooves. The 4″ Model 17 Under Lug is infrequently seen and quite possibly manufactured as an afterthought using factory shortened 6″ or 8 3/8″ under lug barrels. 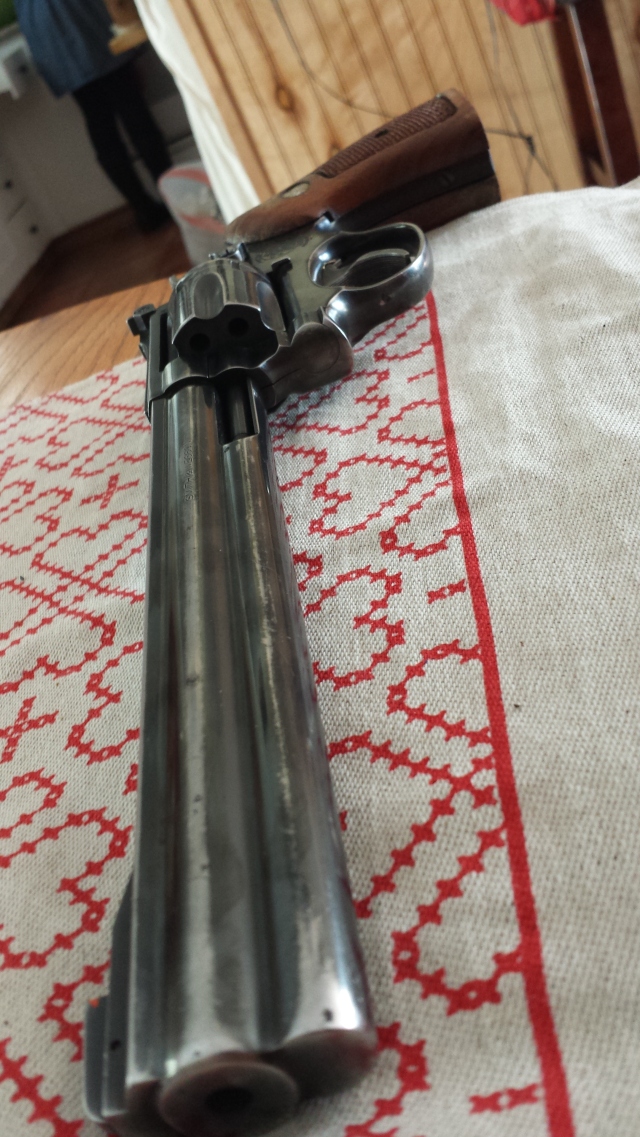 Can you imagine?  No, really!  Make that enormous .22 HEAVIER.  Sure, the designers said.  I’m sure that someone will argue that it cuts down on recoil.  Stahhhhp!  It’s a .22!

When I was in Maine taking care of dad’s estate, I test fired it.  My accuracy with it was horrible. I threw it in the pistol case and sent it home to Colorado.  I pulled it out a month ago when I was at the range and had much the same experience.  It made me not want the pistol, which I was struggling with because of its origin.

I’ve said this before and I’ll say it again – I’ve got two people that I really look to when I need gun advice – our very own B&A Stowaway and my dear old Uncle Bern.  Uncle Bern knows Smiths, so I dropped him a line complaining about the pistol.

He suggested that I change the grips.  I was a little puzzled.  It came with these funky grips,mentioned above in the Wikipedia article, which were a bit big for my hands and contoured in a way that just wasn’t comfortable to me.  I dug through Dad’s stuff and came up with the grips in the first picture.  They weren’t a perfect fit on the pistol, but they fit my hand better.

I’ve also been talking to B&A about stance and hold on pistols.  He’s a certified NRA Firearms Instructor and had some great tips.  For years, I’ve been standing side-to, right arm extended, with pistol in hand.  I changed my stance to facing forward, left hand cupping my right hand.  That also seemed to improve things.  I think my dad taught me the first position, stating that standing side-to made you a thinner target for enemy fire.  Being that no enemies have fired on me thus far, I found it okay to change my shooting stance.

I’m learning a lot about trigger pull as well, more in action than theory.  In the past if a piece had a poor trigger, I either worked around it or got rid of it.  My Dad’s Smiths have no trouble in that department.  He either had them worked on by a professional Smith repairman or fixed the triggers himself.  Some would consider them very touchy.  I’m starting to understand that’s part of accuracy.  Why?  If you’re pulling a six-mile-long trigger on a double action only pistol, the muzzle is going to move ever so slightly as you’re pulling on that trigger, knocking off your accuracy.  Sometimes you move much more than you ever could imagine.  All of this is making me rethink my purchases of DAO (Double Action Only) pistols in the past.  Revolvers have fallen out of favor in recent years, but I’m starting to understand what my dad meant when he used to say, “There’s nothing more reliable than a wheel gun”. 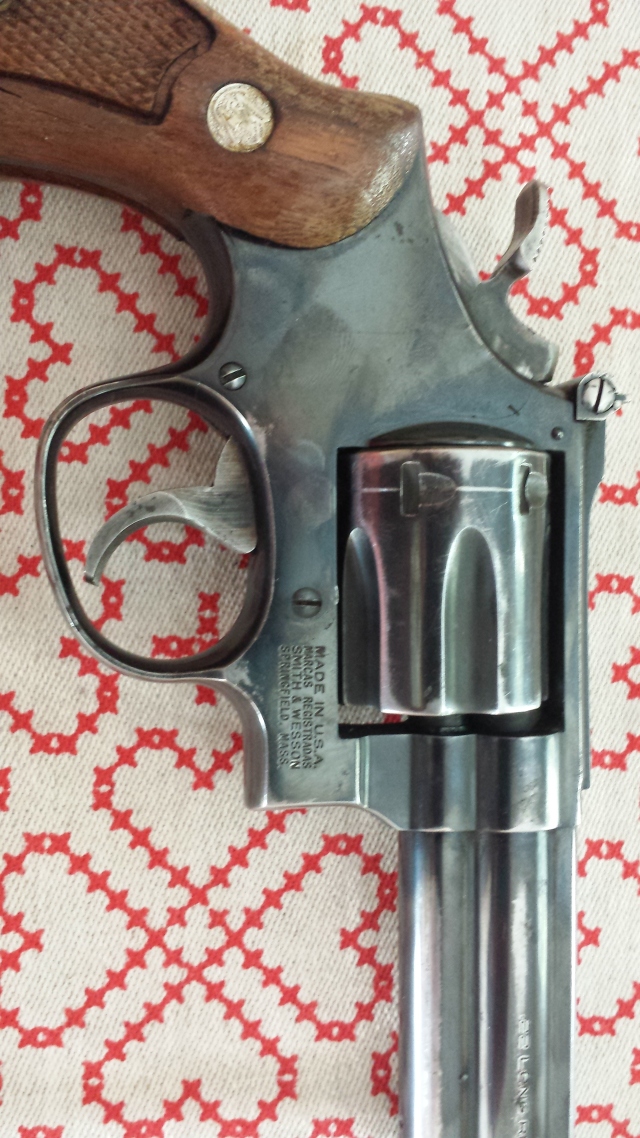 All of these things have repaired my relationship with this gun.  I brought it out over the weekend and implemented everything.  Needles to say, things have changed.  I’m not a crack shot with it by any means, but I’m hitting targets decently and found myself walking away with a positive attitude on the gun. 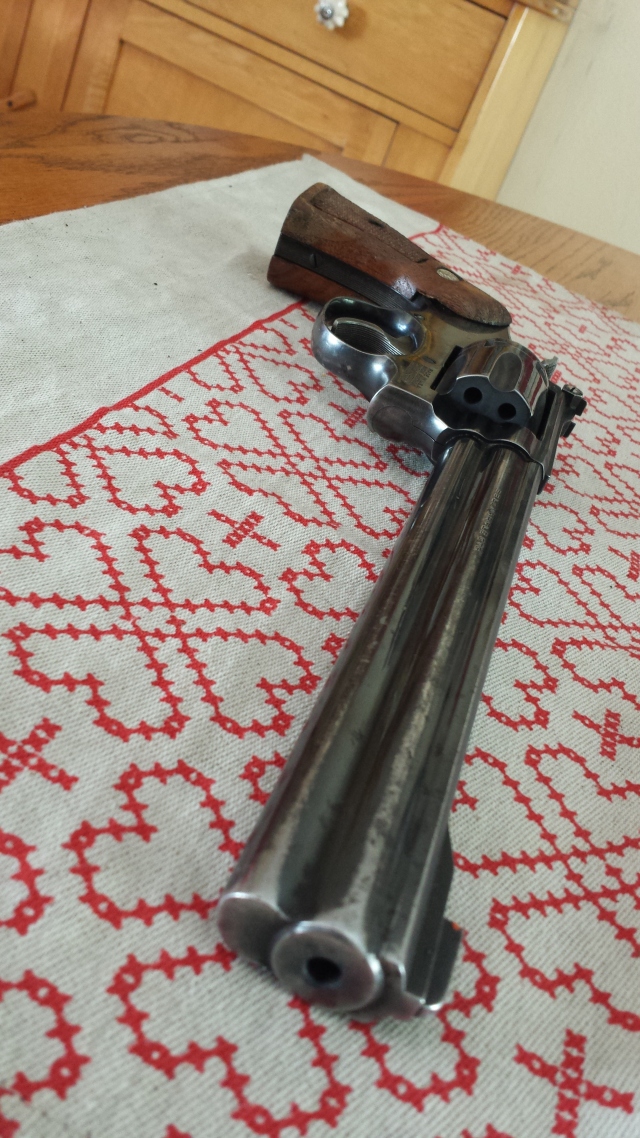 Stay tuned.  I’m losing my vision capabilities in my right eye, so I’m experimenting with shooting with my left.  This should get interesting.