I’ve got yard rabbits.  Like, rabbits that I let loose in 2014, expecting they’d be eaten by the fox during the night.  They’ve been here ever since.  Many rabbit folk say that a domestic rabbit can’t live on forage alone.  They’re wrong.  The two girls in my yard have done just fine.  In fact, they’re fat with hardly any help from me.

I caught one last year in a live trap and bred her to a buck.  Just to see if it worked.  It did.  A month later, I saw her pull fur.  Four weeks after that, I saw pea-sized bunny babies skittering out from under my shed.  There were seven in all.  All but one were killed by predators.  The last one we figured was a buck, due to the way he was built.  We called him Thunder.

Thunder was about a year old.  Rabbits can breed at 4 months (that’s pushing it a bit), but we’d seen no action between he and the girls until recently.  When he did mount them, they kicked him off.

Apparently, he closed the deal with one of the does, though.  I caught her pulling fur and stashing it under the deck the other day. Being that we’re selling the house, that isn’t ideal.

I went to Sportsman’s Warehouse to pick up some .22 shorts.  I usually buy CCI shorts and look for something in the neighborhood of 710 fps. I know those rounds are quiet and I can do basic jobs without being heard around the house.  They were out of CCIs.  All they had were these.

None of the boxes listed feet per second.  Based on grains, I thought I’d be be okay with the 20 grain rounds, but the sales guy pushed me to buy the subsonics.  I grabbed the Super Extra Shorts figuring they’d be pretty close to the 20 grains and pack a little more punch at 29 grains.

When I got home, Thunder was out in the yard.  I got the kids’ bolt action Davey Crickett .22 and nailed him in the head with a 20 grain.  It was over long before he knew what was happening.  I looked him over.  He was very healthy.  He had never spent a day in a cage and I’d fed him vegetable scraps at most.  He was a self-made bunny.  He was as big as my cage raised rabbits, if not larger.

Afterwards, I decided to try the Super Extra Shorts, thinking they would be similar to the 20 grains.  Man, was I wrong.  I stood in the dining room and fired out the back door and the gun made quite a *crack*.  I laughed and slid the door shut quickly and my wife scolded me for a moment.  I’m certainly glad I didn’t try the subsonics.  The .20 grains will do for now.  Though at $5.00 a box, they’re a little cost prohibitive.

I didn’t worry about the cops showing up.  I learned that lesson through my dad.  He came to visit a few years back and was working on my black powder rifle on the back deck.  He got something stuck somewhere and ended up firing off a shot in the back yard with no lead.  It was pretty loud.  I freaked out, but the old man just stood out there, still working on the gun.  Nobody came.  Mind you, my neighbors are probably 150 feet away.  I asked what he was going to do when the cops came and he said he would tell them exactly what happened and ask them if they wanted to fire off a shot.  By that age, he was at the point where he didn’t give a crap.  Now I understand why. 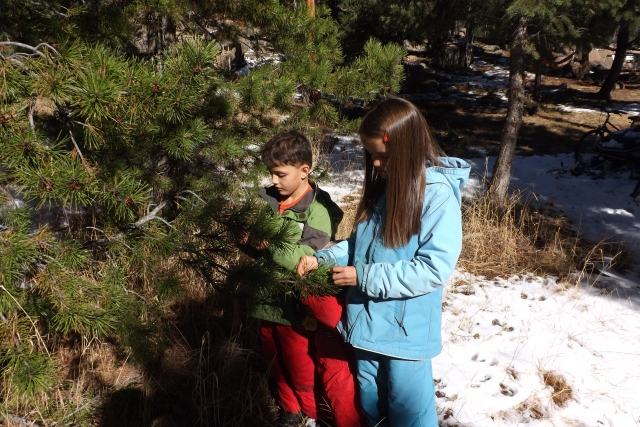 The Mohawk Indians called the Algonquins the “Adirondacks”.  Adirondack’s literal translation means “bark eater” or “tree eater”.  During the winter starvation, the Algonquins would pound the inner bark of the pine tree to make a type of flour and eat it. (source – Living Afield)

Because it’s high in vitamin C.

Did the Algonquins know that?  They understood that there was a health benefit related to it.  I’ve also heard that explorers spending the winter with the natives would die frequently from malnutrition.  The Algonquins told them to boil pine needles in water and drink it.  They saved lives with their recipes.

On Sunday mornings, I try to get the kids to watch something educational.  Many times, I turn to Ray Mears.  As I was outside feeding the chickens last Sunday, my middle boy came out on the front porch.

“Papa!  I want to drink pine needle tea today.  Ray is drinking it and it looks good!”

I fired up Bertha.  Here she is.

She’s big, ugly and hungry for wood.  My neighbors from California think it’s okay to cut firewood into 24″ sections.  That’s huge.  When they give that wood to me, I have no choice but to feed it to Bertha.  I might mention that if I had cut firewood to 24″ lengths for my father or grandfather, they would have cuffed me upside the head.  It’s too friggin long for any regular wood stove.

I picked a pine tree and we went for the needles that were young and green.  If you don’t know a pine tree from other conifers, it’s the one with the long needles.

Now, an old woodsman (there aren’t many left) will tell you to chop up the needles and throw them in a cup of hot water.  Strain the needles through your teeth, they’d say.  What kind of bushcrafter are you!?!?

I borrowed a tea infuser from my wife.  Chopped up the needles and put them in, then put some honey in the cup.  I know, I know….honey in bushcraft tea.  Not very bushcraft like, now, is it?

I let Bertha do her thing to the water, but didn’t let it boil.  I’ve read that it’s kind of like green tea.  If you pour boiling water on it, you ruin it by making the needles bitter.  You just need very warm water.  The tea was good.  The kids liked it.  Here’s proof.  This is Willis.  He’s like the guy you smoked pot with at college.  Except he isn’t high.  He’s naturally psychedelic.  He sees the world through amazingly different eyes than the rest of us.

I used the infuser and honey for a reason.  I wanted the kids to like it.  That’s important to me.  I’m the type that liked black coffee the first time I drank it.  Not everyone is that way.  People need to sweeten it up with a little cream and sugar.  After they become junkies, you can feed them black coffee and, in desperation, they will drink it.  In time, the children will drink chopped up pine needle tea without honey.  I told them that if times ever got desperate for any reason, they should drink the tea.  They think I’m crazy, but they never say it out loud.  Which is cool.  It gives me license to be dad-crazy.

If you haven’t tried it, try it.  It contains the most valuable vitamin in your tool kit.

My wife never knows what to get for me, so I was browsing the web this morning with my son, B(ig) W(heel) Stowaway. I came across this crate that I thought would be cool!

Then I read through the description, looked closer at the picture, and realized that I have all of this stuff and it cost me about $20, not $75.